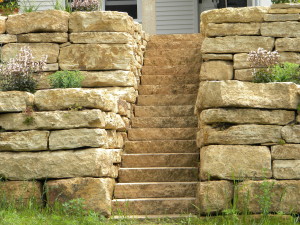 Budgets… what can we say about them, other than they have their place in our lives. This is a reality that we, as a design/build landscape company, have to deal with on all projects. In the past the process used to go like this: we would come in and have a meeting or two with a prospective client, and would take a stab at designing in what we felt the scenario called for, maybe a couple of different options to provide some choice for the client. Typically a couple of choices, maybe up to three, in a variety of price-points.

But there can be a better way, one that removes a lot of the guess work from the entire process, and puts everyone on the same page in the beginning. That process goes as follows: we have a meeting or two, and our designer asks you what your budget is, so she can design accordingly. It doesn’t have to be an exact figure, maybe a range, but at least it gives us an idea what is possible, what direction or directions to consider moving, or to perhaps rule out.

But asking a potential client’s budget is not always the easiest, most logical step in the process. Some people are guarding that secret like national security depends upon it. To give away that information would be to lose the upper hand in the hard fought negotiating game that inevitably accompanies these kinds of decisions. You can kind of tell who those people are not far into the process, and with them it may be impossible to ask that kind of question—maybe they’re too ‘old-school’. I’m fine with giving those folk a bid the old-fashioned way—kind of a shot in the dark method. But something gets lost in that process, and maybe if we’re well beneath that well-guarded secret number, we could have done and designed so much more to fill in around the edges, or given them some flair or extra-ordinary flourish on the design that would have made it really pop.

So there you have it; much of the time we ask that difficult question, sometimes we don’t, when the hints are too obvious, or when we’re competing with a number of other contractors for a job (see article titled: “Competition” at other tab on website). Oftentimes those competitive situations are all about price, with a plan or design already in hand, and the question doesn’t make sense. But if you’re on the receiving end of this question from us, rest assured that our motives are good, and that we consider it a good sign, and a good thing, that we feel free to ask you that question. We ask you to remember, please, don’t shoot the messenger.